*Digital Files Sold For Personal Use Only

Turbo-Hydramatic or Turbo Hydra-Matic is the registered tradename for a family of automatic transmissions developed and produced by General Motors. These transmissions mate a three-element turbine torque converter to a Simpson planetary geartrain, providing three forward speeds plus reverse.

The Turbo-Hydramatic or Turbo Hydra-Matic (THM) series was developed to replace both the original Hydra-Matic models and the Buick Dynaflow. In its original incarnation as the Turbo-Hydramatic 400, it was first used in the 1964 model year in Cadillacs. The Buick version, which followed shortly thereafter, was known as the Super-Turbine 400. By 1973, THM units had replaced all of GM’s other automatic transmissions including Chevrolet’s Powerglide, Buick’s Super Turbine 300, and Oldsmobile’s Jetaway. Starting in the early 1980s, the Turbo-Hydramatic was gradually supplanted by four-speed automatics, some of which continue to use the “Hydramatic” trade name.

There are no reviews yet.

Only logged in customers who have purchased this product may leave a review. 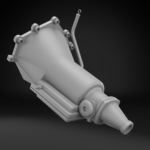